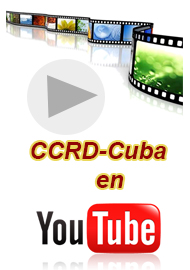 The CCRD-C assumed to work institutional processes of analysis, participation, advocacy and solidarity, which can help to prevent and overcome problems, difficulties, crises and conflicts of various kinds, through reflection, study, dialogue, service social, reconciliation and decision making and community actions.

The following lines aim to propose some indicators to consider for working with focus groups in the communities and different groups of action CCRD-C, with an emphasis on learning and change factors.

It is based on the theoretical contributions of Enrique Pichon Riviere 1 on operating groups as well as the contributions of strategic therapies brief type and own investigative experience in working with groups in communities, in terms of creating a methodology based in democracy and citizen participation that serves to work in think tanks of any sector or social group, emphasis is placed on aspects of human relationship that is encouraged in think tanks, as it is part of the thesis are the elements of human and group relationship which determine and influence learning and change , beyond the aspect of content

Traditionally we tend to evaluate the effectiveness of the groups coordinator aspects of content and procedure, the role of coordinator is intended objectives and works for change, modification beliefs and harmful to human development in general attitudes. As a researcher is assumed that there are certain things to keep in mind not to confuse their role, and the goals, but all group relationship is a human relationship that has common points, because regardless of the characteristics of the groups and in any field , which should not be changed is the human relationship there put into play, the humanity of the process, the role. Sometimes facilitators pervade both its role of change agent this same role hinders opportunities for change, change is not the other but us, so it is necessary to rethink our role as agents of change, rethink the premises from which we start.

For this reason before we know how to do in a group from certain purpose, any coordinator should rethink what you are doing there, and what their existential mission. Well to break the obviousness of everyday life that hinder development and critical for change ( a feature so ubiquitous from social science), it is also necessary replanted aspects related to the logic of the objectives from an existentially , and role in the process.

What is a think tank?

Any think tank community social content should help illuminate the meaning of human existence, to take a holistic view of life and health, promoting human dignity, helping to develop a culture of peace and community participation with emphasis in the poorest, weak and marginalized.

The mission of any coordinator then he must understand a democratic way of relating, taking into account as a person who learns and participates, is a human being sharing and learning in the process, and that their role involves a role not unlike the other roles that come into play in a group, is a person who shares and understands that everything he does is based on socialization and human growth of all the other understands the need to be.

Conception of the change in the groups: epistemological pattern.

The change in the groups is something that is always happening, not only occurs in the other but also in which formally placed in the position of facilitator, researcher, on the premises of an agent of change; because teamwork means a share from an environment of peace and share experiences that serve all in a learning process for everyone. The ability in what we conceive as change intervention is to help, encourage, understand, learn to identify the shift to more humane relationship forms is always happening, you just have to rate them , recognize them , because they are already in groups and individuals concerned. Discover from the human is to account for something that was already in the group or the individual: the universal values ​​of solidarity, fraternity and mutual help that identify us and make us understand that all human beings need each other.

Overall dimensions of work to be considered for social change

How to achieve it:

Working in groups of reflection is achieved through a specific way of community work, encouraging critical reflection of the members of the groups are formed, which functions as an instrument psychological partner through three levels of the same process:

Through these three levels or internal logic of the reflection group is stimulated understanding of everyday life and changes occur in the processes of individual and collective subjectivity, that undermine the mechanisms of passive reproduction of social imaginary and practices. Therefore it is a subjective empowerment learning through experience.

The proposed methodology according to the experience of its practitioners is done through three stages groupware or procedures:

The logic of the procedures and techniques.

In order to avoid the tendency to intellectualize the reflections and identify clearly the problems and contradictions, it is advisable to use or integrate tools used in dramatic play psychodrama with the intention of promoting reflection from the experiences. Learning is experiential.

This requires a proposed dramatic situation that is represented by members of the group on the subject to be treated and then prompted for a description of the entire group of the scene.

The next step is the question of the feelings associated with the characters in the dramatic situation. The idea is that people can take the place of each other’s experiences through recognition of emotions involved, it allows learning in which the humanity of the relationship is recognized, the possibility of recognizing one and another their needs expression and understand before assessing overall situation of daily life.

One is made ​​after reflection of the exposed situations, trying to find meanings and group senses through the experience of sharing interpretations, the logic of this learning is based on listening to what the other can bring, here it plays a fundamental role the facilitator providing democratic forms of consensus and dialogue, rather than content issues, archy form, not the content and performs adaptive synthesis based on group unity.

The result is an experiential learning, as we reflect through the experience of other constitutes me as a human being, enhances the need to understand all human beings as agents of change, the contribution of anyone understanding human development, regardless of their social, physical, or ideological condition.

It is a device to create experiential consensus , for different situations we go through the prism of feeling and shared collective interpretation, understanding of human diversity and vision of this diverse meeting as an opportunity for human growth is encouraged.

Phases which must go through a think tank in communities.

The role of coordinator from a relational Humanist approach:

According to the logic of work outlined in these few lines, we can conclude that:

Board of the Christian Centre for Reflection and Dialogue

The Task Force Learning Theory created by Enrique Pichon-Rivière in the 60’s – opens a new line of work and reflection on the possibility of using the groupality as an instrument for change.

The technique seeks to integrate intellectual and experiential in the group process aspects. While group participants study and discuss the theory, they visualize the various obstacles that arise spontaneously in themselves and in others. This results in a synthesis that then enables the identification of group phenomena to which participants are integrated later as coordinators.

totalizing a new methodology in which the thoughts and feelings on the subject are harmonized in group work This raises. In turn, also it has an instrument to intervene in institutional processes when the operating group is expanded with the development of institutional analysis that provides a reading of the problem of power in institutions focus.

OPERATING GROUPS ARE DIRECTED TO …

The Task Force is a teaching technique, which began Pichon Riviere, which says that “it is a set of people with a common goal that integrate operating team.” This serves to encourage students responsible and autonomous learning which, will make participants achieve learning to learn. The coordinator should take into account the ECRO of each person. It is the benchmark scheme, which is a unitary integration of the world and the body, in order to build a group ECRO.

The taskforce is explained from several theories such as: